The 500 m long climb is perfectly secured with 1000 m of steel cable, is rated at medium difficulty (A – B – in some places B/C) and is suitable for the less strong alpinists or for families with enthusiastic young climbers. An early start, alpine experience and a good overall physical condition is a prerequisite for the ascent of the climbing route. Along the ascent, there is no water and no escape routes. A withdrawal is possible only by down-climbing. The via ferrata is fully secured with a steel cable and no passages have to be dealt with in unsecured terrain or by free climbing.

Many steep and difficult sections have been mitigated with steel clamps, which function as steps. Nevertheless, the last part of the via ferrata, the so-called Angel’s edge, presents a very impressive rock passage.
The orientation of the via ferrata to the southwest allows for an early ascent of the route, and the climbing season extends well into late autumn. The experienced mountaineer will even be able to access the Heini Holzer via ferrata during many winter months.

Ascend with the cable railway Meran 2000 to the top station, which can also be reached from Hafling – Falzeben with the gondola lift. Follow the wide road for a short distance to the junction with the sign for the via ferrata. Then turn left on the trail no. 18 (Ifinger Schartlweg – partially secured with steel rope). Proceed past two turnoffs to the signposted branch-off to the start, just below the easily recognizable platform (rope-up area).

Ascend with the car. Proceed via the signs for the Ifinger Hut to the Ifinger notch and from there follow the Ifinger Schartlweg no. 18 (partially secured with steel rope) to the marked branch-off below the platform.

(Middle station of the cable railway Meran 2000 – a short ascent to Gsteier). Follow the route no. 3 to the Ochsenboden. Continue to the Ifinger Schartlweg (no. 18 – partly secured with steel rope). From there turn left to the signposted branch-off to the start, just below the easily recognizable platform. 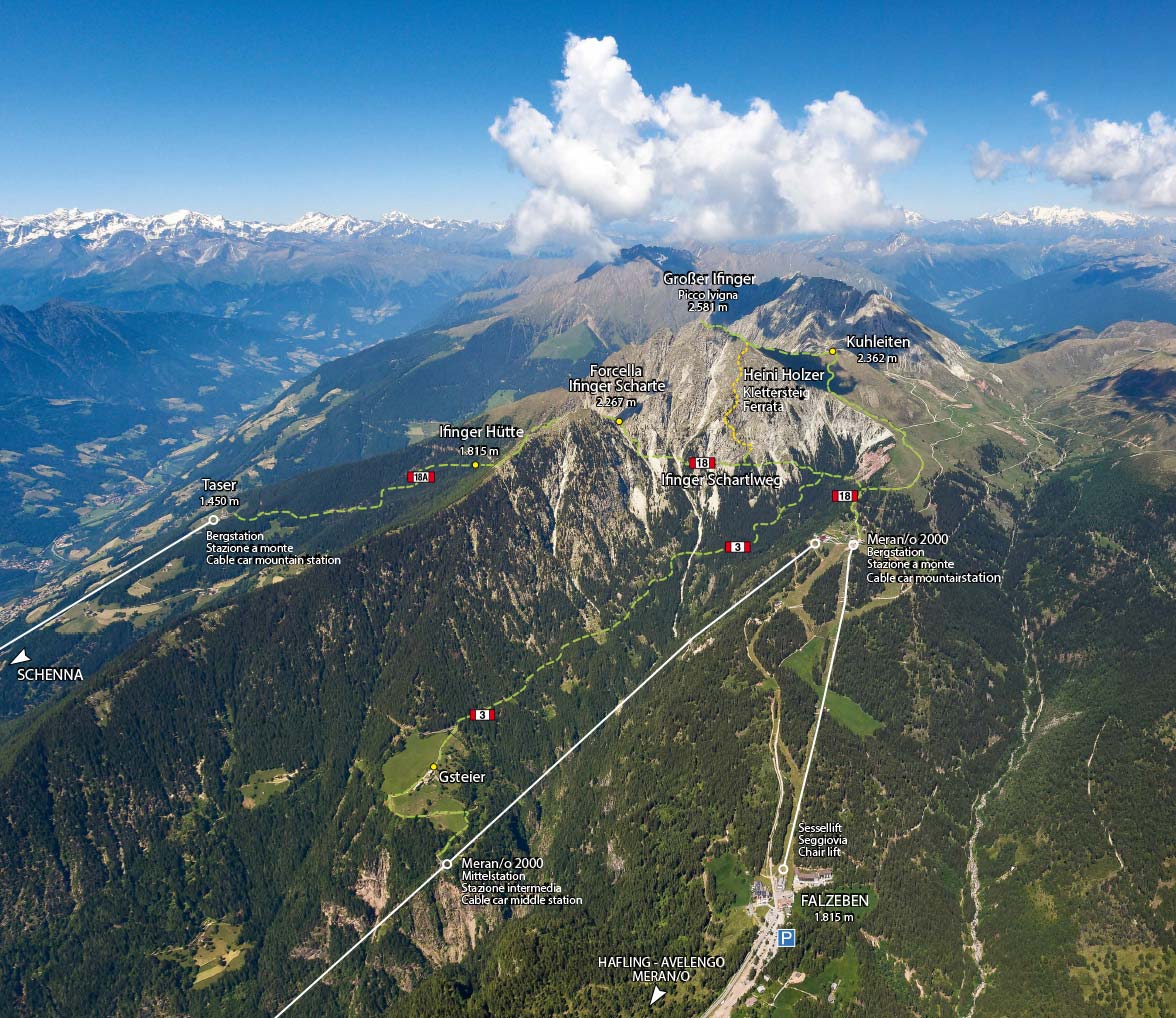 From the exit, follow the signs to the junction “Kleiner Ifinger” (2552 m) and “Großer Ifinger” (2581 m). From there, the descent starts down to the clearly visible Kuhleitenhütte (open every day from 9am to 5pm until the end of October). Anyone who is late, or who does not want to stop at the hut, can follow a trail shortly before, which slips to the right and leads back down through the grass slope to the wide road (gravel road) which returns to the starting point.